Isshinryu Karate (the One-Heart Method) is an Okinawan style of karate. It is a relatively recent style, having been developed by Tatsuo Shimabuku in the 1950's. Isshinryu karate is meant for street fighting, and to this end it has been designed for power and efficiency, with little wasted motion. It was brought to North America by US Marines who were stationed on Okinawa and were taught Isshinryu by Shimabuku himself. 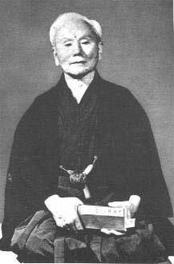 Gichin Funakoshi
The Origins of Karate

Methods of unarmed combat have been practiced for thousands of years. The full story of the martial arts is largely lost in legend. What is known however is that Chinese martial arts trace their lineage to the Shaolin Temple of Northern China. A legendary Indian Buddhist monk, Bodhidharma, now known as the father of kung fu, taught there from 526 to 535 AD. He taught the monks breathing and fighting skills, which then spread throughout China.

Okinawa is a collection of islands South of Japan and East of China. As in most regions, an indigenous martial art developed. It was called tode.

Geography made Okinawa a transshipping point between Japan And China, so the economic and cultural influence of China on the islands had a long history, which peaked with a formal treaty in 1349. Some Okinawans settled in China and some Chinese moved to the islands. Chinese boxing was introduced to the islands though these exchanges.

In 1429 the islands were united for the first time, and the new king collected all the weapons and stored them in a central arsenal. This greatly facilitated the successful 1609 invasion by the Japanese Satsuma clan.

In 1761, a Chinese military attaché known as Kushanku to the Okinawans, arrived and taught the Chinese art of chuan fa (called kempo in Japanese). Other Chinese attaché known to have taught Okinawans include Chinto and Iwah. Their students mixed the Chinese arts with tode. Although forbidden by the Japanese, the blended art spread throughout the island under the innocuous name of te (hand) or Okinawa te.

Shuri-te became Shorinryu around 1915. Naha-te split into Gojuryu (hard-soft) and Uechiryu. In 1898, while the tes were transforming into the ryus, the teachers of the new art agreed to call it karate (Chinese hand).

The most famous modern karate teacher was Gichin Funakoshi, pictured at right, the father of shotokan. He taught karate in the transition period when karate stopped being a secret practice and came into the open. He is credited with the first demonstration of karate outside Okinawa and was instrumental to its spread and the introduction of women to the art as well. In 1930 the meaning of karate was changed to empty hand.

The Creation and Spread of Isshinryu

Shinkichi Shimabuku was born in Chun Village Okinawa on September 19, 1908. By age 14 he started studying Shuri-te from his uncle, Kamasu Chan.

Later he studied Shobayahiryu (the original Shorinryu style) from Chotoku Kyan. Then he studied Gojuryu under Chojun Miyagi. By the time World War swept up Okinawa, he was a well known karate teacher. At first, he avoided conscription into the Japanese army by becoming a farmer, but later the situation worsened; the Japanese wanted every able-bodied man, so he went into hiding. Such was his reputation that many soldiers were sent to capture him. The officers who finally caught him kept his location secret in exchange for karate lessons.

Once the war ended, his business destroyed and the economy devastated, Shimabuku turned to farming for a living, but continued to train. Desiring a system with the power of Gojuryu and the speed of Shorinryu, Shimabuku gradually forged his own style by combining elements of these styles during the 1950s. He announced the creation of the style officially on January 15, 1956. Isshinryu means one-heart method, or one-heart school. The name was chosen because in the words of the master, all things begin with one.

The style spread to America via US Marines returning home from Okinawa in the late 1950's. Among the men who brought Isshinryu to North America were the marines: A.J. Advincula, Steve Armstrong, Don Nagle, Harold Long and Harold Mitchum. 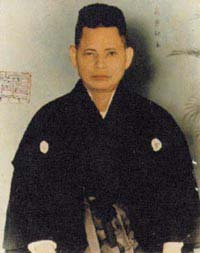 Shinkichi Shimabuku
The Life and Many Names of the Master

I come to you with only Karate, empty hands. I have no weapons, but should I be forced to defend myself, my honour or my principles, should it be a matter of life or death, of right or wrong, then here are my weapons, my empty hands.

The 8 Codes of Isshinryu Karate


1. A person's heart is the same as Heaven and Earth.

One can no more go against the prompting of one's true heart than the heaven and earth can disobey natural law. The power or energy of nature is much like man's power (the tremendous power of focused nature--like the waves in the karate crest-- is like the focused energy of a master karate-ka).

2. The blood circulating is similar to the Moon and Sun.

Human nature, given the right aspirations, is as reliable as the daily round of sun & moon. It (human nature) is something to be trusted. Sensei trusted his own nature, let go, dreamt, and found the soul of his art.

3. The manner of drinking and spitting is either hard or soft. (Or, both hard and soft are permitted under the law)

There is often more than a single way to accomplishing the same goal (or even the same move).

4. A person's unbalance is the same as a weight.

A divided self accomplishes little, because it is unbalanced, weighted down with unnecessary knowledge. A properly weighted self, a balanced, unified self, however directs single-minded energy to achieving a single-minded goal.

5. The body should be able to change direction at any time.

1) should be able to alter the position of one's body swiftly & naturally at any moment; this is essential for good fighting technique .
2) more broadly, one should adapt to circumstance, in life as well as kumite; only by being supremely flexible can one master Karate & life.

6. The time to strike is when the opportunity presents itself.

Strike when opportunity presents itself, in life, as in battle.

7. The eye must see all sides.

In a fight you have to be aware of your surroundings because an attack could come from somewhere you don't expect. In regular life this means that you should be able to evaluate all sides of a situation before taking action.

8. The ear must listen in all directions.

This one's similar to 7. In a fight, you don't need to only use your eyes. You might be able to hear an opponent approaching from behind. In regular life this might mean that you listen to all sides of a debate before making your decision.